For most developers JavaScript is like a procedural language. It’s just a language that can interact with the DOM, Create Element in the HTML document, Listen to events and so on. But there is more than that we can do in JavaScript. You can actually implement Object Oriented programming in JavaScript. In-fact everything in Javascript is an Object as you will see later in this post.

Objects in Javascript does not have a classname. They all are linked with a prototypical inheritance which we will later see in this series. You can add any number of properties to an object.

All the keys in an object must be a String. If it is not it will be converted to a string. If there are two key’s with the same key-name the second one will replace the first one.

You can access the object property in two styles. The Array Notation and the “.” Dot Notation. You can see that we have used both in the above examples.

You can create object in Javascript using the Literal Notation or using the Object.create() method of the global Object. With Object.create you must specify the prototype of the new Object being created, it can either be an >Object or Null. But it must be specified.

Objects are passed by Reference

Objects in Javascript are passed by reference. Any where the object value is changed it affects the original Object.

Details of Property is not Yet Over

Every property is a named collection of attributes. Those attributes are as follows.

Note: These properties were always there in Javascript, but they were never exposed to the programmer. In ES5 this can be done. 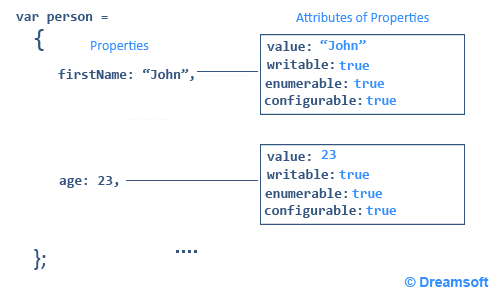 For you to define an object with setting this bits you can use the following methods.

With defineProperty you can create a single Object property by passing the object to create the property for, the name of the property as key and the bits as an Object which is the third argument.

defineProperties can be used to define multiple properties at once for an Object.

This code does the same thing as the code shown initially to create the person object. It seems pretty complex, but it lets you modify the bits of the properties of the Object.

The following is the code where the object is created by modifying the bit.

In the strictPerson object you cannot modify the value of firstName and age. You cannot delete the firstName, location and getDetails. The getDetails() method won’t appear in the for in loop.

In Javascript object can be created either using the Literal Notation or Object.create() method as i told you before.

New in ES5: Object now can be created with the prototype of the object set to null. By default the Object.prototype is set to the new Objects prototype. I will discus in detail about prototype in the next series.

Delegation is when object “A” is passed as a reference to object “B” when “A” is knows something that object “B” doesn’t know. This is achieved through prototype in Javascript. Javascript is a prototype language. prototype is a concept that need a separate post of its own. If there is anything Scott does not knows, John may know it.

Reflection is a method for inspecting the object properties. This can be done using the typeof keyword.

You can check if a Object has a property of its own by using the hasOwnProperty method.

You can delete a particular property of an object using the delete" keyword.

Note: If you need to know the methods available in an object, open the Google Chrome console or Mozilla Firefox console and type in the objectName and the list of available methods will appear.

Facebook is a Platform where you can grow your audience in a massive amount. In this post you will learn how to integrate Facebook social plugins...

This is the second series of Object Oriented Programming in JavaScript. This post discusses about the Objects built into JavaScript. Once you have gone through this...